What is Christmas to you?

If Christmas is a Jesus Christ event, how did Santa found his way in to that story?
I can’t remember seeing any Santa at the stable where Jesus was born. I can’t imagine Jesus beliving in Santa either. If he did, wouldn’t his father be rather mad at him for believing in more spirits than himself?

And what happens if both Santa and Jesus would say -let all children come to me?

I think we have mixed up two different celebrations. That is rather nice when doing it right. But it’s still confusing.

In old Sweden beliefs Santa was a little person that lived around the people houses. He helped out whitout anyone asking for his help. He did it when nobody could see. If the people weren’t nice to him he got angry. When they were nice to him he helped them a sort of gave them luck.

I think it’s from those ancient days the porridge tradition come. If you put out a bowl of porridge outside your house on the porch that little invisible man will eat it and you will notice his gratitude afterwards.

But we have mixed that version of Santa with the Coke Santa in modern days. So now we have the reindeer and slade story too plus the porridge tradition. So we have gone from a little helper on the little farm all year around til a one day a year Santa coming with presents on Christmas eve.

I guess that what happens to traditions that last for eons. They change.

I still like the little helper version best. It’s nice to think about that we may have little creatures around our houses helping out when we forget things or don’t have time. They are like guardian angels.

All though, I like Santa and his reindeer slade ride too. And the Jesus being born story.

With all the mixup about Christmas I think everyone who wants can celebrate the holiday the way they want. That’s a thing I like about Christmas. It’s not one right way of celebrating, it’s many right ways. 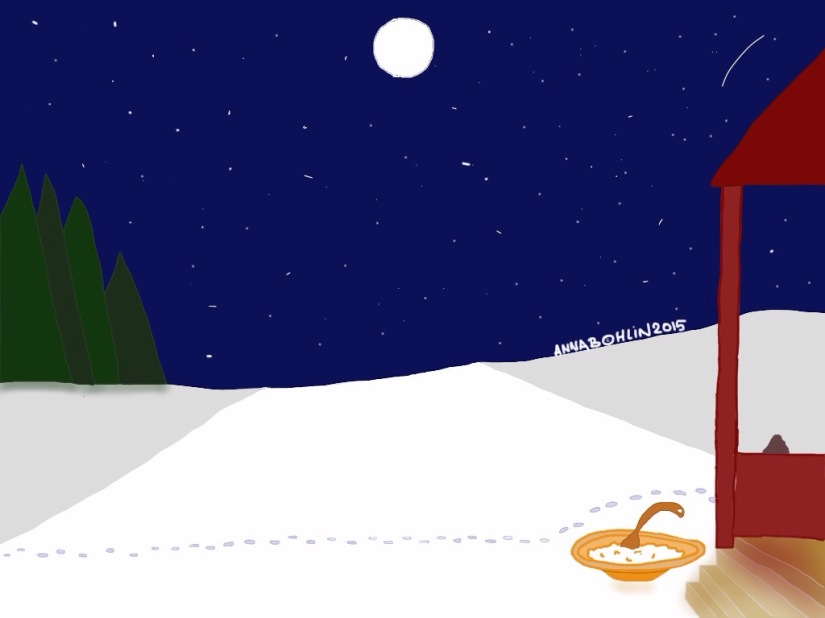 5 thoughts on “Waiting for Santa?”