Hos den lokala nyhetstidningen itrosa.se kan ni läsa en insändare som jag skrivit. Tidningen har fått ett svar på insändaren. Vad tycker du om frågorna och svaren?
I got a text published in the net local newspaper itrosa.se and the newspaper got an answer from our leading politician. What do you think of the questions and the answer below, a google translation from the Swedish version at itrosa.se? 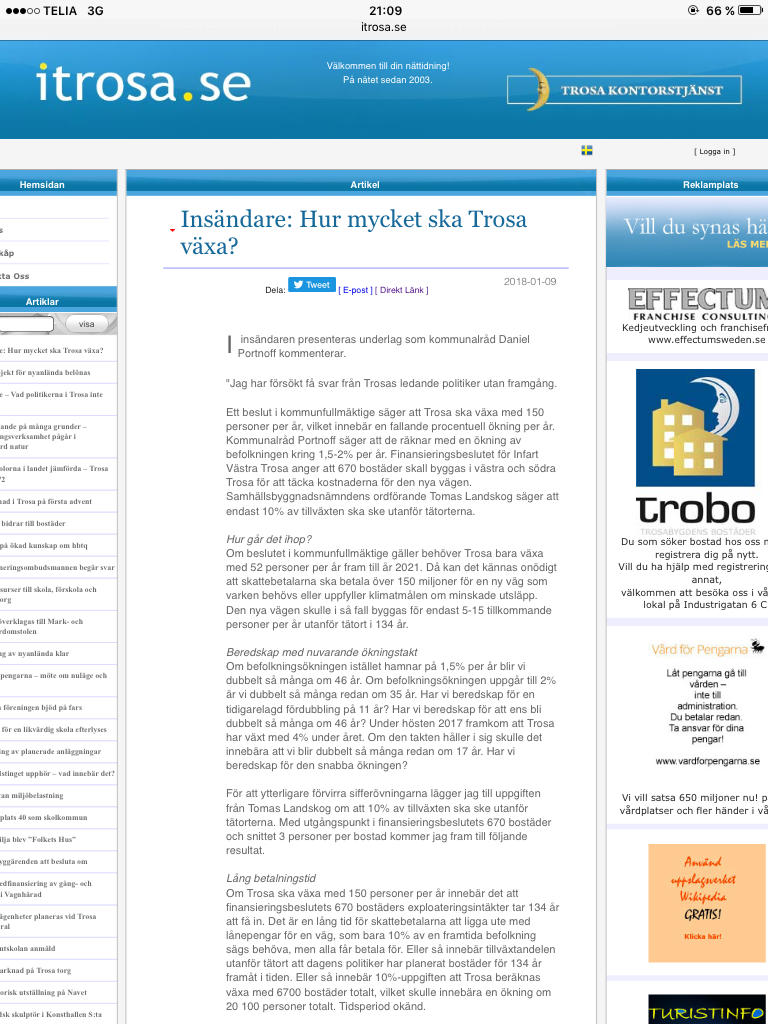 The submitter presents the basis of which municipal council Daniel Portnoff comments.

“I have tried to get answers from Trosa’s leading politicians without success.

A decision in the City Council says that Trosa will grow by 150 people a year, which means a declining percentage increase per year. Municipal council Portnoff says that they expect an increase of the population around 1.5-2% per annum. The investment decision for Infart Västra Trosa indicates that 670 homes will be built in western and southern Trosa to cover the cost of the new road. The municipal council committee Tomas Landskog says that only 10% of the growth will be outside the urban areas.

How does that work?
If the decision in the City Council applies, Trosa only needs to grow by 52 people per year until 2021. Then it may seem unnecessary for taxpayers to pay over 150 million for a new road that neither needs nor meets the climate goals of reduced emissions. In that case, the new road would be built for only 5-15 additional people per year outside urban areas for 134 years.

In order to further confuse the number exercises, I add to the task of Tomas Landskog that 10% of growth should be outside the urban areas. Based on the 670 housing decisions of the financing decision and 3 people per home, I come to the following results.

Long payment time
If Trosa is to grow by 150 people a year, it means that the 670 resettlement income of the financing decision takes 134 years to get in. It’s a long time for taxpayers to lend money for a road, which only 10% of a future population is said to need, but everyone has to pay for. Or, the growth rate outside the urban area means that today’s politicians have planned housing for 134 years in the future. Or, the 10% task entails that Trosa is expected to grow with 6700 homes in total, which would mean an increase of 20,100 people in total. Period unknown.

So my question remains: How much is Trosa to grow?

Quick exposure in the exponential effect: Begin with the number 70 (year) and share the growth rate figure. Growth of 10% means a doubling effect of 7 years. (70/10 = 7)

Learn more about the impact of the exponential effect here:

We contacted Daniel Portnoff to comment on the sender. He responded as follows:

“In 1992, Trosa municipality had 9894 inhabitants. By the end of 2016 we were 12,447. Population growth has thus been around 110 people a year, though it has varied over time. Some years it has fallen slightly and in other years it has increased by more than 300 This is mainly due to the business cycle.

We live in a free country with extensive legislation in the housing sector. Overall, the Swedish housing market works poorly. We would need a comprehensive review of large parts of housing policy at national level to get a better functioning housing market.

As local politicians, we try to do our best to ensure a housing production where all forms of return are available and the entire municipality is part of balanced growth.

In a growing municipality, we get a growing economy and properly managed to improve our ability to have great ambitions in terms of quality and supply in our municipal service to citizens. Population growth also creates better conditions for other services and a well-functioning labor market.

Nobody knows how the future will look and how the economy will be in terms of housing construction. However, a reasonable assumption is that the whole of Trosa municipality will continue to grow somewhere between 150 to 200 inhabitants per year for the next 10 years. But it will vary over time.

One thing I know. It is as well not the city council that determines how many inhabitants we become. There are a lot of individual decisions that control the development of a free country to a very high extent. On the other hand, the municipal council in a municipality where more people want to live can take responsibility for housing and plan for future growth. We try to do that and are sure to ensure broad political agreement over the block limit on these issues. “

7 thoughts on “Hur mycket ska Trosa växa – How much growth in Trosa?”