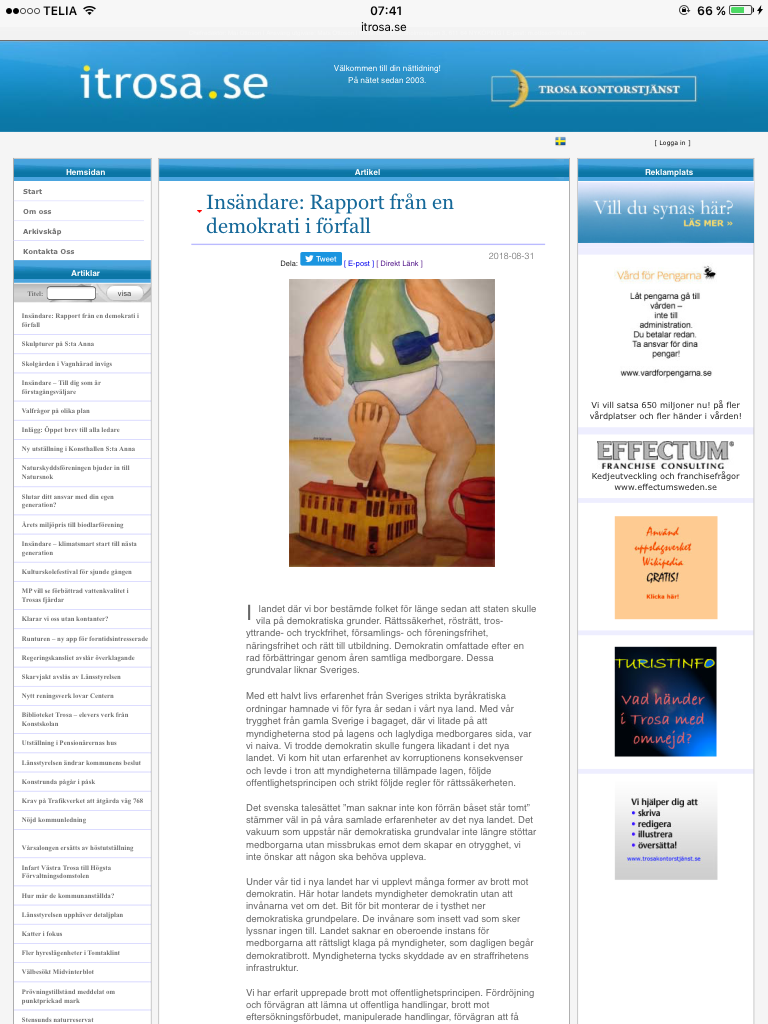 Here’s a google translation of a letter to editor published in the digital newspaper itrosa.se

Report from a democracy in decline

In the country where we live, the people long ago decided that the state would rest on democratic grounds. Legal certainty, voting rights, freedom of belief and freedom of expression, freedom of assembly and association, freedom of business and right to education. These foundations are similar to Sweden’s.

With half a life’s experience from Sweden’s strict bureaucratic arrangements, we ended up in our new country four years ago. With our safety from old Sweden in the luggage, where we trusted the authorities to be on the side of the law and law-abiding citizens, we were naive. We thought democracy would work the same in the new country. We came here without experience of the consequences of corruption and believed that the authorities applied the law, followed the principle of publicity and strictly followed rules for legal certainty.

The Swedish saying “you do not miss a cow until the cow box is empty” fits well with our experience of the new country. The vacuum that arises when democratic foundations no longer support the citizens without being abused against them creates an insecurity, we do not wish somebody to need to experience.

During our time in the new country, we have experienced many forms of crime against democracy. Here the country’s authorities threaten democracy without the residents knowing about it. Bit by bit they quietly put down democratic pillars. The inhabitants who realize what is happening does not get anyone to listen. The country lacks an independent instance for citizens to complain legally to authorities who commit democracy crimes daily. The authorities appear to be protected by an impunity infrastructure.

We have experienced repeated violations of the publicity principle. Delay and refusal to disclose public documents, breach of the injunction ban, manipulated documents, refusal to obtain appealable decisions, delay and prevention of legal processes, lawsuits and decisions. Residents who are suffering are completely legally and defenseless when the law no longer seems valid. Gaslighting actions beyond belief.

We have experienced how unprotected democracy stands when the representatives of the governmental authority in every employee and electoral politician actively choose to refrain from following democratic rules in favor of a few and at great loss to other citizens. This development frightens us much more than terrorism will ever do. The decay happens to be hidden. One day, the sandcastle of the authorities will suddenly collapse.

But move back to Sweden, maybe you think when you read this testimony. A good thought. There is, however, a catch. We already live within Sweden’s borders and have experienced all this in our municipality Trosa, in our county Södermanland and in our country Sweden.

However, these stressful years in exile have taught us that democracy is unbeatable as governance when it works. It is up to each of us every day to defend it and not to violate democratic rules. Every time we violate them, we threaten our own country. Are the breakages really worth the risk that our entire country may collapse?
No matter what party we put our vote on this fall, the votes continue to support a democracy in decline. However, voting rights mean that we can still influence political developments, unlike pure dictatorships. Not to vote is never an option in a democracy.

Do not sit at the election day, go and vote no matter what party you put your vote on.